Dear Fed, esteemed markets: Your job is almost done, so try not to overdo it!

We expect the Federal Reserve (Fed) to increase the federal funds rate by 50 bps in September and by another 50 bps in December. After that, the path for the federal funds rate is not that clear. If we look at what has happened so far, and according to those that argue the US economy was in a recession during the first half of the year, there is probably no need for the Fed to increase interest rates at all in September and December because the US economy is already in recession. However, we are not in that camp. But we believe that the US economy is going to experience a recession starting, perhaps, in the first quarter of next year and extending into the third quarter of the year.

This is projected on the effects of current monetary tightening by the Fed, which includes our expectations that they will move the rates higher by 100 bps by the end of this year.

Thus, after December, the Fed should seriously consider staying put for some time, until the economy has more time to digest the significant year-to-date rate increase in the federal funds rate.

And we are saying more time to digest because the economy is already having indigestion with what has already happened with the current increase in interest rates. It was true that the fiscal efforts to fend off the effects of the Covid-19 pandemic on Americans went too far, with both administrations issuing checks for individuals that kept incomes increasing as the economy was plunging into the depths of the Covid-19 induced recession. This happened at a time when Americans did not have the opportunity to spend. Thus, excess demand and lack of supply started the inflationary process. However, all this excess spending is almost water under the bridge, it has almost been flushed out over the last year or so.

Two reasons for this. First, the economy has fully reopened during the summer and Americans are going back to their normal spending habits. Second, inflation has brought down the purchasing power of incomes, wages, and salaries. Thus, it is no longer pushing prices much higher than what they are today and in fact, the prospects are for inflation to continue to decelerate, and for prices to stop increasing, a process called “disinflation.” 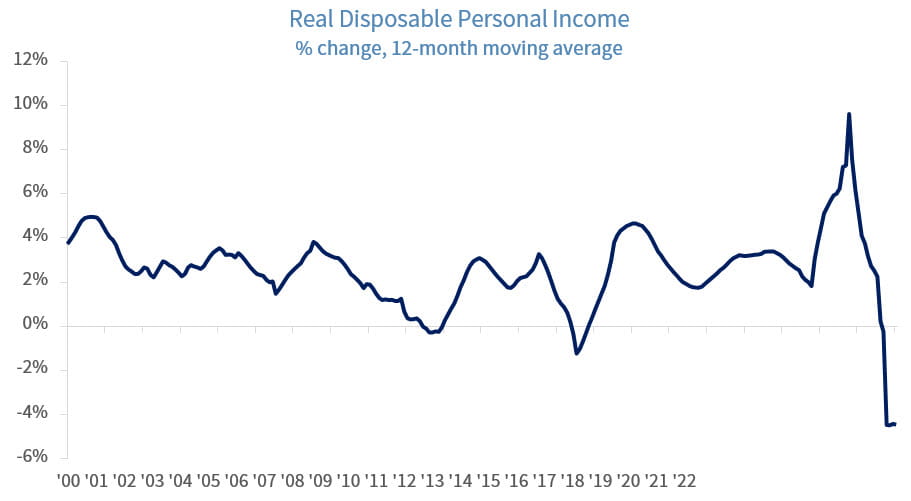 The graphs above show disposable personal income in levels and in percentage terms and show that real disposable income is already in the red. Furthermore, real wages and salaries both for goods as well as services workers are also coming down due to inflation as the graph below clearly shows. 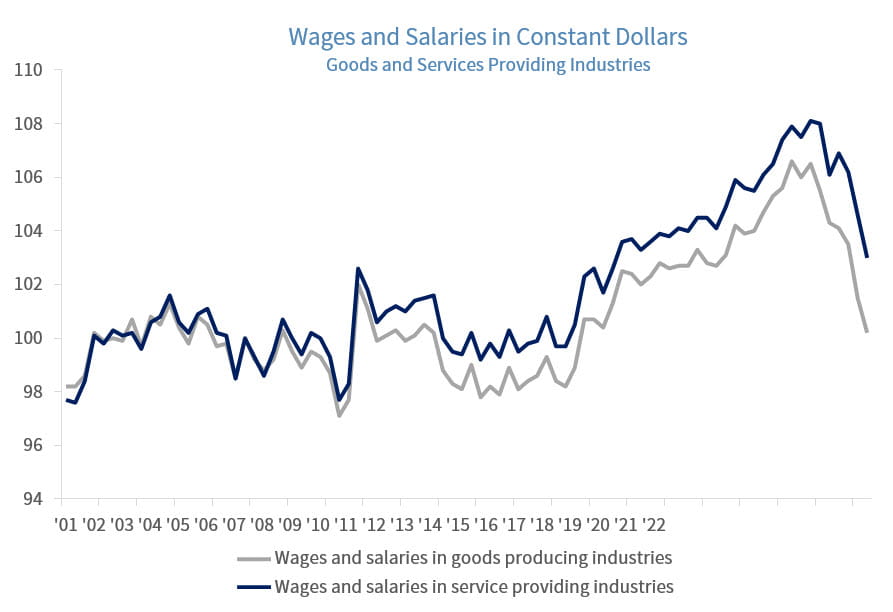 Thus, some of the factors that were pushing prices higher—factors the Fed has control over—during the last year and a half or so are largely behind us and this means that the Fed should be patient and allow current interest rates to finish the job, as prices are going to come down, slowly but surely. The Fed has control over demand and thus could help weaken some of the sectors, like the housing market, by increasing interest rates, something that is already well on its way. However, the Fed has no control over external factors affecting prices, as it was the case with the war between Ukraine and Russia, which helped keep inflation higher than expected during this year.

But even if risks of further escalation in the war between Ukraine and Russia remain, plus drought conditions worsening in the US and across the global economy, those factors should not drive US monetary policy, as demand conditions today are much different than a year or so ago. Although jobs are plentiful, real incomes, wages, and salaries have been declining fast, so they will have limited effect on driving inflation higher today compared to the recent past.

You may ask the question of why do we say “Esteemed Markets” in the title of today’s report if the Fed is the one responsible for increasing interest rates? We say “esteemed markets” because it seems that markets are trying to push the Fed to overdo it and raise interest rate more than necessary to quell inflation.

But the Fed needs to remember that it has two principal objectives, low and stable prices, and low unemployment. However, if it increases interest rates too much it will send the economy into a deeper recession and the rate of unemployment is going to increase. This means that if it is difficult for many Americans to get to the end of the month today while having a job, imagine how difficult it will be for them to start, let alone, end the month, if they have no jobs. This is what needs to drive monetary policy today. That is, the Fed, and markets, must be clear that higher nominal wages are not driving prices higher today.

Nominal wage increases in the leisure and hospitality industry is driven by the need to bring back workers into this sector to pre-pandemic levels as the opportunity cost for those workers have increased due to the characteristics of the industry. Thus, wage increases in this industry is the result of competitive market forces and is not the reason why inflation is going higher. 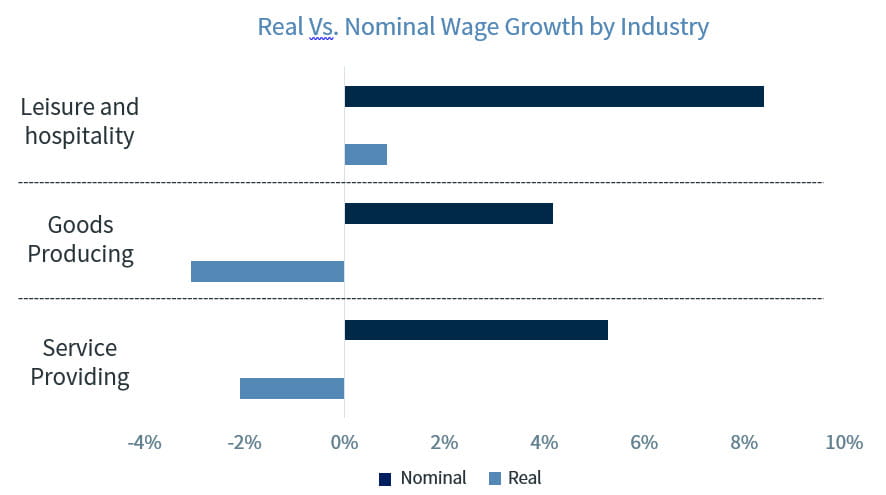 Economic and market conditions are subject to change.

Opinions are those of Investment Strategy and not necessarily those Raymond James and are subject to change without notice the information has been obtained from sources considered to be reliable, but we do not guarantee that the foregoing material is accurate or complete. There is no assurance any of the trends mentioned will continue or forecasts will occur last performance may not be indicative of future results.

Consumer Price Index is a measure of inflation compiled by the US Bureau of Labor Studies. Currencies investing are generally considered speculative because of the significant potential for investment loss. Their markets are likely to be volatile and there may be sharp price fluctuations even during periods when prices overall are rising.

Consumer Sentiment is a consumer confidence index published monthly by the University of Michigan. The index is normalized to have a value of 100 in the first quarter of 1966. Each month at least 500 telephone interviews are conducted of a contiguous United States sample.

The producer price index is a price index that measures the average changes in prices received by domestic producers for their output. Its importance is being undermined by the steady decline in manufactured goods as a share of spending.

Personal Consumption Expenditures Price Index (PCE): The PCE is a measure of the prices that people living in the United States, or those buying on their behalf, pay for goods and services. The change in the PCE price index is known for capturing inflation (or deflation) across a wide range of consumer expenses and reflecting changes in consumer behavior.

FHFA house price index is a quarterly index that measures average changes in housing prices based on sales or refinancing's of single-family homes whose mortgages have been purchased or securitized by Fannie Mae or Freddie Mac.

ISM Services Index is an economic index based on surveys of more than 400 non-manufacturing (or services) firms' purchasing and supply executives.

Non-Manufacturing Business Activity Index is a seasonally adjusted index released by the Institute for Supply Management measuring business activity and conditions in the United States service economy as part of the Non-Manufacturing ISM Report on Business.

New orders index measures the value of the orders received in the course of the month by French companies with over 20 employees in the manufacturing industries working on orders.